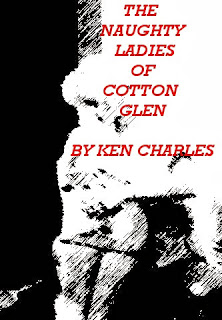 Terri, an aspiring actress with a temper, gets her career and life under control with a little help from her tennis partners: Laura, Jeri and Panda, served up in three hard sets of OTK in a locked locker room.

When she’s not subbing into the Thursday Afternoon Doubles at the Cotton Glen Golf and Tennis Club, Lucia Morales makes time for an affair - with her husband. The affair is hot, but an unmade bed lights an extra fire.

Terri And The Producer

After her Thursday afternoon attitude adjustment, Terri promises to make amends with her producer. But sometimes, apologies take more than mere words.

There's Something Naughty About Mary

Jeri makes more than enough money to take care of her young submissive live-in lover, Mary. But to teach her some responsibility, Mary has to pay for some the bills, including part of the rent. Mary is delinquent, and Jeri grounds her while she goes off to make the deal of her career. The deal closes earlier than expected, and Jeri returns home to find Mary missing. Not only did Mary go out after being grounded, she also borrowed Jeri’s car and had an accident (while uninsured). A sound hairbrush spanking from Jeri, and a caning regimen, in lieu of payments for the damages to the other car, from its owner teach Mary valuable lessons.

Laura’s younger sister, Sally, is madly in love with Perry. At the company’s annual party, after a couple of drinks too many, she makes a point of bragging to a stranger about him and how he always gives 110%, and complaining that the only thing holding him back is his stupid boss. Of course, the stranger is that boss.

When Perry does not respond to her repeated calls to apologize, Sally tries a different tack. She appears at Perry’s house and performs three skits: a naughty young lady gossips in town and earns a date with Daddy’s belt; a naughty school girl is caught by her favorite teacher making fun of the school principal; and a naughty young lady in a bright red dress shoots her mouth off a company party, and earns a session with her fully accessorized red hairbrush. Perry gets to choose one scenario, and play it out.

The Pediatrician And The Birth Of The Nereid

Lucia Morales’s pediatrician takes a well-deserved break in the Greek Isles. But some people just can’t keep work off of their minds.

It’s only a couple of days until Lucia’s tenth anniversary, and she has no clue what to get her husband. She goes shopping with Laura at the mall, but nothing catches her eye. On the way home, however, they find a sex shop, Deus Sex Machinas - Sex Toys of the Gods. At first, Lucia is too embarrassed to even set foot in the store. But Laura drags her in anyway, and proceeds to embarrass her.

Several days later, Lucia buys her husband a collector’s print. When she goes to pick it up, it isn’t ready. So she goes for a cup of coffee, and finds herself back by the sex shop. Without Laura there to embarrass her, Lucia takes a second look in the shop. She ends up making a couple of purchases, including a leather paddle, a leather skirt and bra, and a crop. Her new toys keep her tenth anniversary night new and exciting.

Everyone gets one last prance across the stage, or over the knee. Panda gets a speeding ticket. Laura needs stress relief. Mary fails to make calls for Sally’s engagement party.