They went to Europe and kicked Fascists’ and Nazis’ asses. They went to the south Pacific and fought off hoards of slant-eyed devils. They came home and got houses and cars and a wife and two kids. Their word at home was the law. They got middle level management jobs and spanked and screwed their secretaries. They said hosannas at the feet of Joe McCarthy. All was right with the world. Then the world passed them by.
The 1960’s came and their world ended. Suddenly they couldn’t refuse to hire minorities or give all of the choice work solely to white males. You could even get sued for pinching your secretary’s ass. Then by the time free love came into vogue, their hair lines were receding and their washboard abs were washed out.
It only got worse over the next two decades. Sure they learned how to use a Dictaphone. But they still had to call their kids to come over and hook up the VCR and the Atari. Then came the computer age. The more adventuresome had the kids set up an AOL account. Some of them actually learned how to send an email.
But technology was moving too quickly. Computers shrank in size and phones grew beyond Alexander Graham Bell’s wildest imaginings. Information was too readily available to too many people. But too much information is overwhelming. People needed an escape from reality, at least for a couple of hours. And thus was born the Massive Multiplayer Online Role Play Game. While providing peace of mind to countless youth, it did nothing to alleviate the mental anguish of The Greatest Generation who don’t live grafted to their computers and smart phones. MMORPG didn’t work because the “O” was missing from their lives. Fox News gallantly rose up and filled the void.
MMORPGs create fantasy worlds where you can travel to other worlds, shoot monsters, engage in felonies without fear of punishment, wage war, and make love without worrying about safe sex. Fox News provides an idyllic world where the 1950’s are brought back to life. For hours every day, one can sit back and listen to vapid blondes talking about how a woman can only be happy if she is married and how she needs to submit to her husband. Balding, overweight men will pontificate about the evils of premarital sex, abortion,  welfare, immigration and the relentless war on Christianity. In short, Fox News is nothing more than a Massive Multiplayer Role Play Game. 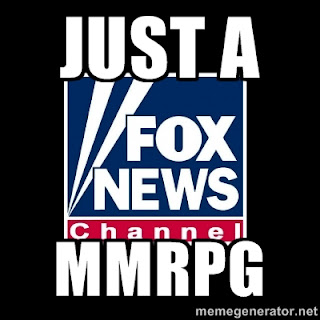 Instead of letting Fox News raise your blood pressure because of a lack of factual foundation for their reporting, just recognize Fox News for what it is, a MMRPG. Facts have no relevance. In a fantasy world, the world builders control reality. Accordingly, the facts are whatever the world builders want them to be. If they want pigs to fly, then pigs will fly. If they think taking healthcare away from millions of people and controlling a woman’s body is best for society, then these things, indeed, are best for society. Just remember that it is only best for society so long as you remain immersed in the MMRPG. Once you reenter the real world, just as it is no longer permissible to steal cars or blow things up, the Fox News fantasies must be left behind.

CK Copyright 2015; Moral rights to be identified as the author of the foregoing story asserted worldwide (including in Great Britain in accordance with Sections 77 and 78 of the Copyright, Designs and Patent Act of 1988)
Posted by Charlie Kenmore at 7:50 AM