Ballroom caning from The Mercies of Cinderella by Ken Charles 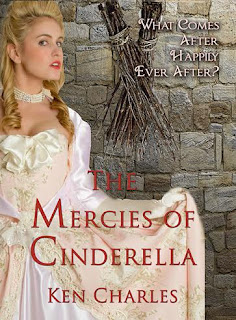 It had the curious appearance of a ballroom dance. The twelve hand selected members of the Prince’s personal guard, in their finest dress uniforms, strode into the Court in two files of six. Each carried a four foot long cane at his side. As the two columns approached the thrones, the last in line stopped. Every four steps thereafter, the next in line from the rear would stop, until the first in each line stopped ten paces from the thrones. The guards then took two steps apart, clicked their heels once, then froze in rigid attention. Cinderella’s twelve Ladies in Waiting, dressed in diaphanous translucent white camlets, entered next in two files of six. When each had taken a place next to one of the guards, the Ladies curtsied to Prince and Princess.

The Ladies turned around in unison, and bent over and grabbed their ankles. Each guard then parted his partner’s camlet at the rear, exposing twelve lovely pairs of creamy white orbs. The guards snapped back to attention as Captain of the Guard came forward, and bowed to the Prince and Princess. Captain of the Guard turned and addressed the twelve pairs.

Cinderella felt tears welling up. She had not told any of them what she intended when she went for her ride. Indeed, until she gave Snow Princess her apple, she had not even thought of such a misadventure. It was not fair that her Ladies should have to pay for her misdeeds.

The Prince and Princess looked out at thirty-six fiery bars.

A dozen yelps, and a dozen more crimson weals leapt to the fore.

A dozen vicious diagonal cuts barred the gates. The guards snapped back to attention, as Captain of the Guard turned back to the Prince.

“A full measure, Milord, as ordered. Does it meet with Milord’s satisfaction?”

“Well done, Captain of the Guard. You may dismiss your troops.”

Captain of the Guard bowed, and turned to his troops.

The guards clicked their heels, then retreated in the reverse order from their entry, leaving the weeping Ladies bent over on display. When the last of the guards had left the Court, Captain of the Guard turned back to the Prince and Princess, bowed, and took his leave.

The Prince rose. “I leave you, Milady, to deal with your Ladies further as you deem meet and proper.”

Cinderella rose and curtsied to the Prince.

“Milord.”
The Prince left the Court to the fanfare of a dozen muted sobs. Once the great hall doors closed behind him, Cinderella ran down the steps to the center of the room.

The Ladies ran to Cinderella and hugged her and each other. Together they cried.

Ready to read the rest?  http://www.amazon.com/dp/B01B1W4YWK
Posted by Charlie Kenmore at 4:48 PM