"Damn, where is that damn school bus," Lucia muttered to herself. "Do they want all the babies to catch a cold?" Despite her complaints, the bus was just coming into view, and right on time. But it was Thursday, and she was unusually impatient.

Lucia grabbed her daughter's tiny backpack. "C'mon, Maria! The bus is coming! Give Mommy a hug and kiss." Maria, like a little duckling in her yellow boots, rain slicker and cap, splashed over to her mother, and tried without success to lift her face for a kiss without getting it wet.

"If it's still raining tomorrow, Mommy, can I wear your big raincoat?"

Lucia smiled, and gave her daughter a kiss on the nose. "We'll see, baby. Now get on the bus before you have to swim to school." They both laughed, and Maria blew her a final kiss as she jumped on the bus. Lucia waved goodbye, and thought that even if it is not raining tomorrow, I will not need this big coat to keep you from asking me why I keep squeezing my legs together!

He looks furtively both ways as he exits the delivery van, as if any of the neighbors have nothing better to do in this deluge than to watch him slink up the walk. Of course, even if they do not actually see him, it would be difficult not to notice the bright green Morales' Florist and Gifts van parked in Lucia's driveway for the third Thursday in a row.

Lucia is waiting shyly by the door. She cannot believe that it has only been three weeks. It seems like forever. She shivers slightly at the cool wet breeze coming in through the cracked door.

She is not wearing much in the way of protective apparel. But she is warmed at the thought of that first Thursday. Lucia smiles as she remembers how he arrived with the large colorful centerpiece for her dinner party. He complemented her on her dress. They made small talk. Then he told her she had such pretty ankles. She had giggled like a schoolgirl, then on a devilish whim, had slowly lifted her hem to reveal her lovely calves. He nodded with greater interest. She lifted her dress above her knees. Without a word, he came to her, seized her with his huge powerful arms and kissed her deeply. He lifted her dress up to the small of her back. His strong hands squeezed her firm ass, and lifted her to meet his fiery kisses. She has no recollection of how he freed himself from his slacks, but she vividly recalls being bent over the counter, having her panties ripped away, and the crashing waves of pleasure that assaulted her with each pulsing thrust as he took her fiercely from behind.

Lucia finds herself flushing, and short of breath as he enters the hallway. Without a word, he crushes her to him. His jacket is wet and cold against her diaphanous nighty, causing the brown nipples on her small firm breasts to harden like marbles against his chest. She breaks away to catch her breath, but grabs his hands and puts them on her chest. "You're so cold! Here, warm your hands. Do you want some hot coffee?"

He smiles and squeezes her breasts, causing her to moan. "You know what I want!" She knows, and wants the same. He does not bother to hang his jacket, but tosses it on the hallway settee. He picks her up, causing her to squeal in delight, and carries her to the bedroom. She nips his ear, and undoes the buttons on his shirt as they move down the hall. She is surprised as they enter the bedroom when he stops and sets her down at the door. She does not understand the scowl on his face.

"You aren't excited to see me," he replies quietly.

Lucia is confused. She met him at the door dressed in next to nothing, kissed and fondled him passionately, and practically undressed him with her teeth. What more does he expect?

He does not say a word, but merely points to the unmade queen size bed in the middle of the bedroom.

"Oh, I'm sorry. The little one couldn't find her boot, and we had to run for the bus. Then I just forgot when I got home, you know ..."

He puts a finger over her lips. "We must work on your memory." He takes her by the hand, and leads her over to the unmade bed. He sits on the end of the bed, and pulls her over his knee.

"Wh-What are you doing?"

Without answering verbally, he gives her firm round bottom a sharp smack. Satisfied with her surprised yelp, he promptly gives her another smack. Her surprise starts giving way to anger as he smacks her again.

"Oh, I'm quite certain of that," he assures her giving her another loud smack.

He laughs, and removes her hand. His powerful grip prevents any thought of her pulling away. Although it offers virtually no protection, he turns up her nighty, and gives her another smack. He likes the feel of her hot round cheeks under his calloused square palms. Rhythmically, he smacks her again and again, causing her to cry out and kick her legs. Although the pain is extraordinary, she finds herself lifting her thighs to raise her bottom up to meet his punishing hand. She derives a perverse pleasure upon her descent, grinding her pelvis against the ever-hardening rod beneath her. When her bottom is red and blazing, he lifts her and effortlessly impales her. She throws her arms backwards around his neck and locks her fingers in his hair, pulling his head down to kiss away her tears. She grinds her fiery tail into him until they both explode.

Lucia watches the van pull away. She rubs her stinging bottom, and wonders whether to skip tennis this afternoon. Of course, it was her girlfriends who suggested that she have an affair. Mrs. Morales smiles wickedly, and wonders, what would happen to her naughty bottom if she ever had an affair with someone other than her husband?

"Lucia's Affair" can be found in: 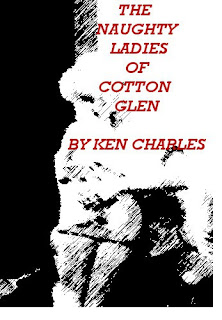 Posted by Charlie Kenmore at 2:27 PM